The management assessment will include an onsite DOE team and will determine whether CHPRC and Jacobs are ready to implement enhanced safety measures to control contamination and protect workers, the public, and the environment. Following this evaluation, any issues identified will be corrected prior to the contractor asking DOE for approval to restart demolition.

The final assessment comes after months of evaluations and preparations following a December spread of low levels of contamination that halted demolition. CHPRC and Jacobs produced a causal analysis, which is an extensive review of causes, and a plan for demolition. DOE reviewed both documents at the local and headquarters levels, and a DOE expert panel concluded the remaining demolition can be successful.

“The strategy to resume demolition of the Plutonium Finishing Plant includes input from workers, labor, and an independent DOE expert panel, and contains numerous safety and work control enhancements resulting from the root cause evaluation and other assessments,” RL Federal Project Director Tom Teynor said. 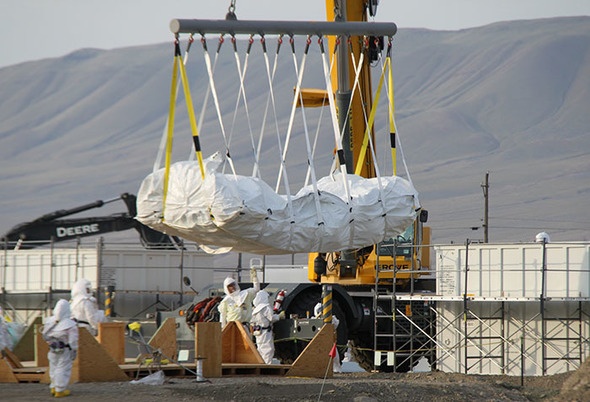 To reduce the amount of contaminated material at the Plutonium Finishing Plant by 90 percent (by plutonium content) before demolition resumes, workers removed more than 100 containers of debris that had already been packaged, including 20 large “super sacks.”

The lower-risk work consists of removing demolition debris from around the Main Processing Facility (234-5Z), followed by demolition of the less-contaminated portions of that facility and an associated storage vault.

The higher-risk work consists of demolishing the remaining portions of the Main Processing Facility — two former plutonium metal and oxide production lines and the tunnels beneath — and removing debris remaining from demolition of the Plutonium Reclamation Facility in December.

The second management assessment, like the one to start next week, will incorporate worker feedback and lessons learned.

“PFP workers, union safety representatives, the technical staff, and project managers have done a great job developing this approach and identifying and implementing enhanced controls,” said Jason Casper, Jacobs PFP resumption manager. “I want to thank them for their partnership throughout this process.” 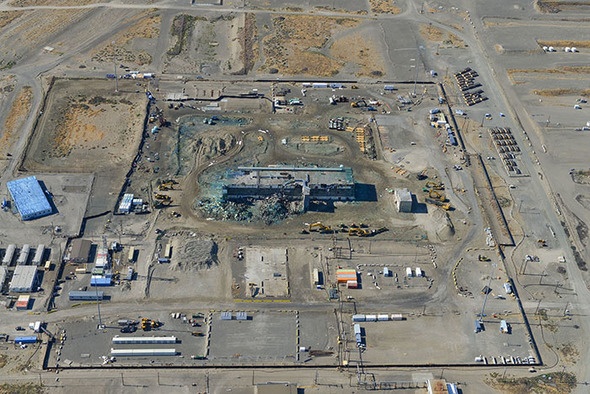 This July 2018 aerial photo shows the partially demolished Main Processing Facility of the Plutonium Finishing Plant at center. Blue areas indicate where workers have been spraying adhesive paint, called fixatives, over the past several months to prevent contamination from spreading.

Enhanced controls to prevent the spread of contamination include expanding radiological boundaries to include a larger area, adding monitoring devices in more locations, increasing the frequency of checking monitors for contamination, removing debris as demolition proceeds rather than letting it pile up, and following manufacturers’ recommendations on dilution when spraying fixatives. Enhanced oversight is also in place for work activities and any proposed changes to work packages.

More information about the phased demolition approach, including enhanced controls, is available at this website. The site includes employee communications, briefings, and other information related to PFP recovery and demolition.